Yes, We Had a Rager Without the Booze - ciaooo!
ciaooo!
Close Search
Drink

Yes, We Had a Rager Without the Booze 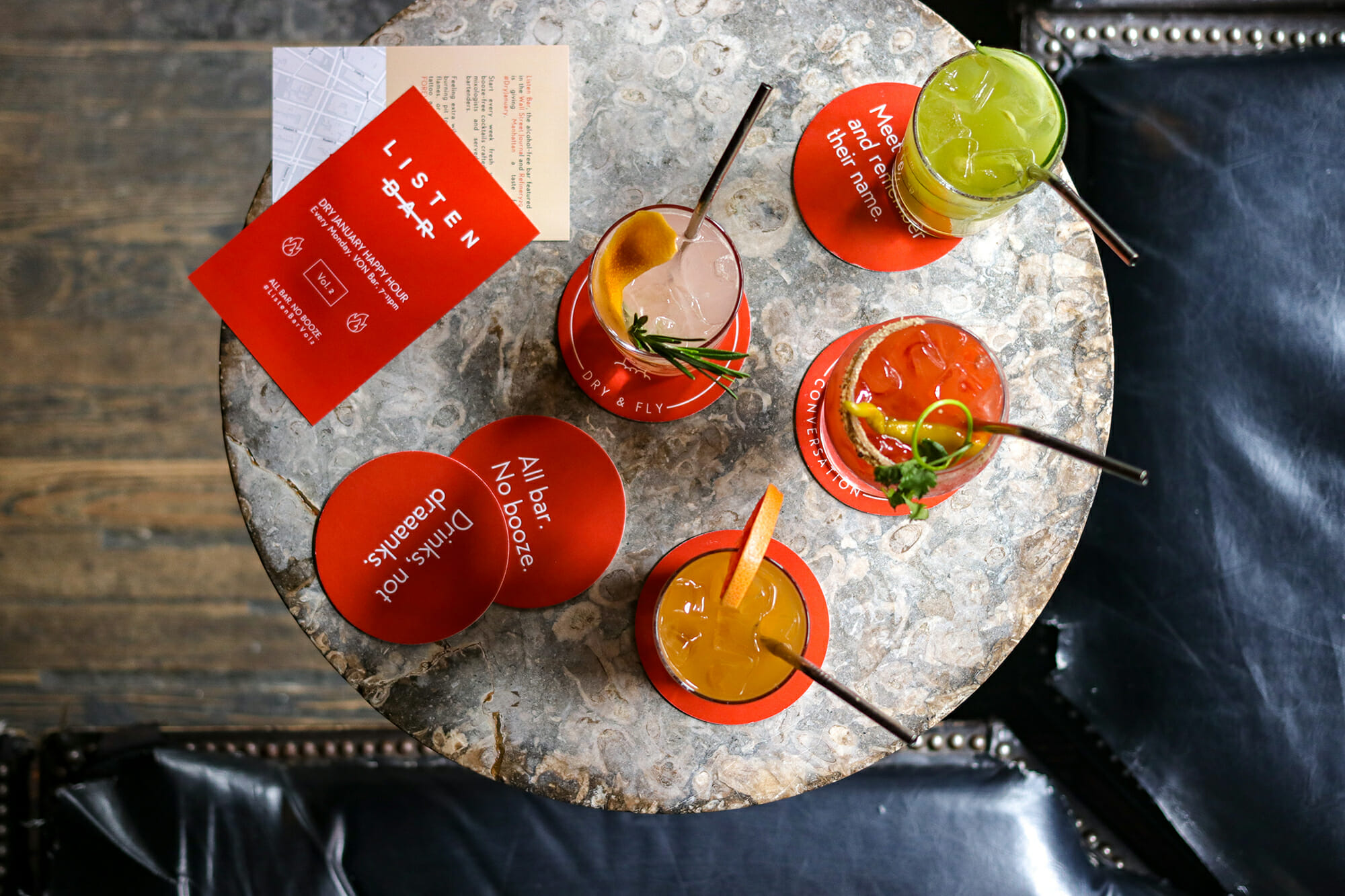 You know, that thing that happens when you go out on a Tuesday for “just a drink” after work with friends and wind up down a black hole of KGB, Solas and other nefarious dive bars in the East Village like you’re an 18-year-old NYU student with a solid fake ID again? Just me? 20 pierogis from Veselka and 4 hours of drunken sleep later, you’re waking up bleary-eyed from the sound of your alarm for work. You mosey out of bed and question your life decisions.

While most people in America might call this borderline alcoholism, we New Yorkers call it a regular Tuesday night.

My close friends know that I can throw back about 13 well Vodka Tonics and still run a marathon. While I have always considered it a deeply honed skill — my doctor isn’t amused.

What can I say, I love drinking! I love the taste of a good Negroni, the temporary bathroom friendships, having a weekly bartender to swap stories with. But as I get older, those 13 vodka tonics have turned into 10 and a mandatory Bacon Egg and Cheese in the morning.

I’m a little older, the wear and tear has gotten to me physically, but my party spirit lives on. So I wondered, how would it feel like – to explore a place that might not give me the shakes?

Whether you’ve given up alcohol forever or just for the night, you might be interested in Manhattan’s first alcohol-free bar. Listen Bar is a completely booze-free bar with solid drinks, nightlife vibes, and great music.

Bar founder, Lorelei Bandrovisch got the inspiration from a dry month challenge from one of her friends. The experience stayed with her as she returned to the “normal nightlife.”

“There are ten thousand bars in NYC, yet there were no nightlife options for nondrinkers,” Bandrovisch recalled during our interview.

She’s right — Let’s face it, drinking is default in New York City. I tell all my transplant friends “We don’t have backyards, we have bars.”  It’s the standard place to meet up with friends, a date, or even your sister. Even if you don’t drink, your friends probably drink, and you’re stuck as the odd one out.

Of course, ordering a soda while out on the town is an option, but Bandrovisch didn’t think that option was enough. After months of reflection, her lightbulb-moment happened in a mentoring session.

“I want to open a non-alcoholic bar.” Bandrovisch proclaimed. When the room was floored – she knew she had something great on her hands.

She wanted Listen Bar to have three key ingredients:

– A bar that actually had bar vibes

– A space where musicians could thrive

She envisioned a spot where her musically-inclined friends could bartend and promote their work. A place where bartending and music could nurture each other.

“Working as a bartender seems like a perfect gig when you’re a musician, but I’ve seen so many friends get drained. Why should bartending be at odds with your music?”

She replaced the question of “What are you drinking?” to “What are we listening to?” Don’t bother pulling up Shazam, ask the bartender! Every bartender is a musician with their own curated playlist. You might be jammin’ out to a track written by the guy who just poured you a Coco-Matcha! It’s a brand new way to interact with your favorite artist and humanize the person across the bar. Bandrovisch noted the dehumanization bartenders in NYC experience. “Bartenders aren’t just providing you a service. They’re humans and we’re equal. The music offers a connecting point for that.”

Listen Bar isn’t just mixing great tunes and vibes, they serve up drinks with a creative kick. Often, flavor falls to the wayside with mocktails, but not at Listen Bar. “We’re working with a great team that’s working at a high level of creativity. It’s not just the taste, it’s the experience, the texture, the mouthfeel. We wanted to create a menu that created the craving for more than just one.”

It’s the first bar to combine the strengths of mixologists, herbalists, and nutritionists to develop a detailed menu with notations such as gluten-free, vegan, paleo, and even refined sugar-free mocktails. There’s something for everyone on what Lorelei describes as their “Greatest Hits Menu.” You can grab drinks named – “Me, A Houseplant” or “Ghost Me, Maybe”, both of which are gluten-Free, vegan, nut-free, dairy-free, caffeine-free but unfortunately, not money free. Try grabbing my personal favourite — Spicy Titties (Lime, Cilantro, jalapeno, Grapefruit and Jarritos) , which channels Lizzo in a glass.

Listen Bar is a bar that has everything but alcohol.  “I wanted to create a place that felt like a bar, something with a sexy and fun vibe,” says Lorelei with a giggle in her voice. “Oftentimes, not drinking makes you feel like the odd one out, but here we’re all having fun in a community-centric space.” An occasional drinker herself, Bandrovisch is adamant about the space being open to everyone no matter their drinking status.

While the idea of not drinking might be scary to some, it’s worth a challenge. Being surrounded in a nightlife environment makes the venture a lot easier.

“You’d be shocked how many people come up to me and say, ‘I can’t do karaoke sober.’ Then ten minutes later, we’re belting their lungs out!!” Bandrovschi recalled their karaoke blitz a few months ago. The bar has a myriad of theme nights from, Modern Wellness, Cocktail Contest, and even Speed Dating (a night that sold out in less than 24 hours).

The bar is currently open once a month at 3 Bleecker St, NYC.  Located under VON bar, occasionally upstairs patrons will wander in with alcoholic drinks. “Sometimes people get defensive,” Bandrovchsi answered when asked if drinkers will sometimes attempt to smuggle in booze. Wanderers are always greeted and welcomed, just asked to leave the booze upstairs. “You’re not banished… but maybe don’t do that. They’re so many places for drinkers, by being ‘that guy’ you’re taking something away from the community we all formed together.”

And it is a community. Listen Bar opened in October 2018 and already has thousands of followers, both online and offline. Their campaign funding goal for a permanent location has nearly been reached.

Bandrovisch won’t give us a hint on the location reveal just yet, she did reveal that the crowd campaign will be releasing a poll for locations on her shortlist.

“There have been so many surprises, and I’m happy people are receptive to the idea. Especially when people are willing to change their minds. I love after a night of partying when people walk out like “Oh, I get it now.’ It makes it worth it!”

You can check out all their upcoming events HERE.

How to Order Wine Like a Pro, Even When You’re Not