In the Age of Corona, Will NYC Ever Be the Same Again? - ciaooo!
ciaooo!
Close Search
Locals

In the Age of Corona, Will NYC Ever Be the Same Again? 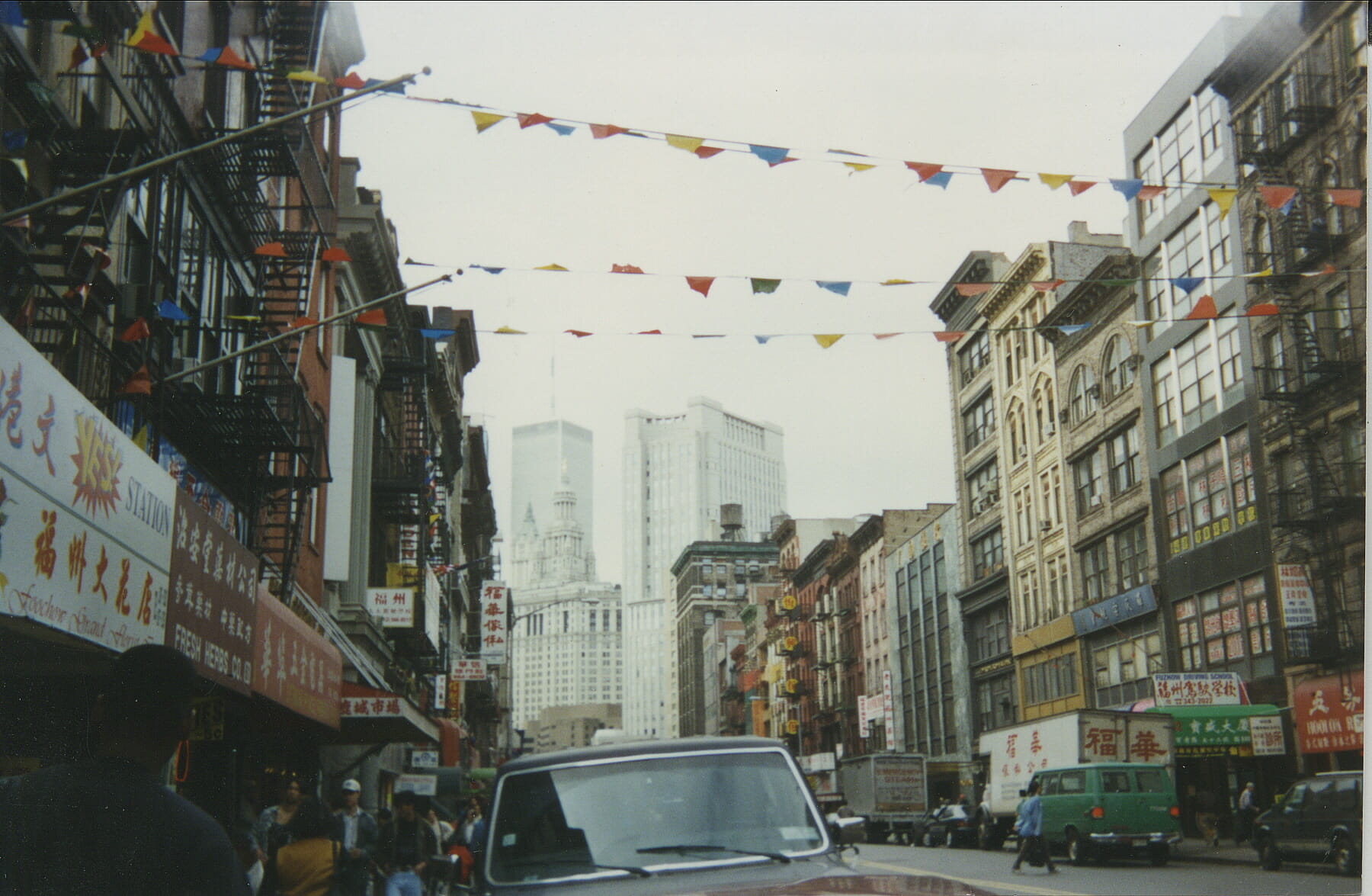 The Chinatown I grew up with was Hollywood.

Synonymous with the film noirs of the 1920s, the streets were painted black, coated in grease. Sidewalks were peppered with a constant stream of extras hawking vegetables. When the lights turned on in our third-floor, 250 square foot walk-up, fit for our family of five on Canal Street, the roaches scattered into a million directions.

When my mom landed in NYC for the first time, a 28-year-old fresh-off-the-plane from China, she said…”This is it?”. Chinatown was the jumping-off point for immigrants, you came here to make your money, and get out as soon as possible.

We left when I was 6. The three of us kids needed more space to spread our wings. We made our way across the bridge to bigger, better, balmier lands. Brooklyn.

My relationship with Chinatown was never more than a train ride away. Every Sunday, we visited our grandaunt, who had been living in the same tenement style apartment on Orchard Street since the 1950s. It even had a bathtub in the kitchen, a relic from the times when hot water had to be boiled for baths. Every Chinese New Year, my father, a chef in one of the many Chinese restaurants, would parade the three of us through the kitchens of his friends’ establishments to collect lucky red envelopes.

With the onset of the Coronavirus, it’s hard to ignore the transition that Chinatown and all of NYC has been going through. Streets once packed with people are now empty. Shops remain bare, entire cities have “shelters in place”, and racist attacks mark the country. There’s tangible energy if and when you walk outside, like a weighted blanket of distrust, fear, and skepticism.  It feels like a Jack Ryan episode we can’t escape.

Chinese restaurants were the first to experience the plight of the Coronavirus, with several major establishments shutting down for weeks on end. According to a study done by Basil Labs, the number of reviews for Chinese restaurants in Flushing, NY dropped significantly when news first broke out about the Coronavirus in December 2019, and then again in March 2020 when it landed in NYS.

Now, with the ban on seated meals, restaurants all across the city are begging for donations to pay their workers, many of which have no health insurance, paid leave and in some instances, citizenship.

Number of Chinese Restaurant Reviews in Comparison to Other Asian Restaurants in Flushing, Queens

Small businesses are going bankrupt, but, the Small Business Administration announced a $7 billion dollar fund featuring 0% interest loans for companies with less than 100 employees. There are also grants to cover up to 40% of missed wages for businesses with 5 or fewer employees. At press time, however, the funds have not been distributed, and only a survey has been put in place for businesses to apply for.

Please share the link HERE with any of the affected businesses you may know of.

Over the past few weeks, I’ve spoken to a lot of local business owners about what has been going on and how we can support them. Is it driving people towards these fledgling shops for take-out orders despite orders from the government to practice “social distancing”? Is it reminding people simply to wash their hands more often? Is to just tell people to stay the eff home? I’ve been conflicted myself.

“You know, having this is chopping off my legs. There will be some establishments that we will have to shut down for good if there is a citywide quarantine.” – Kyle, Restaurant Owner

“If I take my kids out of daycare, who will watch them? I still have to go to work” Mei, Executive Director

While there’s no easy solution for any of this, I find comfort in knowing that New York City has gone through several epidemics before, and made it through, without the technology or resources we have today. The Bowery itself was once a hotspot for diseases. When thousands of residents were crammed together in the tenements without proper sanitation or plumbing, Yellow Fever was a pandemic that took over, killing thousands of residents across 1795, 1799, and 1803.

“The most serious early epidemic of Yellow fever in the United States struck Philadelphia in 1793. Four thousand and forty-four victims perished in four months, or one in ten of the entire population. New York was greatly alarmed.  – Yellow Fever in New York City by Claude Eaton Heade

New York fell into this epidemic soon after,  leading to the creation of the first Board of Health.  Extreme quarantine measures were taken across NYC, banning all Philadelphians from entering NYS.

“Since Yellow Fever in New York was an exotic disease it was successfully combated by quarantine measures long before its true nature was known. In these days of rapid transportation, Yellow fever is still a threat from which we in America are protected by the barriers of quarantine, vaccination, and medical vigilance.” Yellow Fever in New York City by Claude Eaton Heade

An outbreak of Cholera struck soon after in 1832, tied to the lack of clean water. The Board of Health was developed but considered inaccurate and incapable of assisting when Cholera broke out.

A lack of sanitary practices, licensed doctors, and protocol failed to sustain the outbreak. Four separate outbreaks took place over the course of the 1800s (1832, 1849, 1854, and 1866). Eventually, with additional funding raised by the wealthy (when they realized the disease saw no class) better infrastructures and boards were developed to create higher standards of living.

“The Board of Health took many actions that limited the spread of the disease throughout the city: they trained a small army of first responders, established an emergency hospital at the Battery Army Barracks and created plans for the disinfection of the city once the Cholera outbreak subsided.” – ”Disasters: Cholera Outbreak of 1866,  Baruch College

If history has taught us anything, it’s that the virus isn’t going to go away in a few weeks. It will reemerge in a few months or perhaps years again and again until a vaccine can be created. Even then, who knows what mutant strains will be created. There will be no return to the old Chinatown that I knew, but instead, a revolution in how we practice hygiene in our day to day.

Besides practicing cleanliness, we have to engage our government to invest more in our resources to build long term and proactive foundations specifically for pandemics.

When Trump fired the U.S. pandemic response team in 2018 to cut costs, he left the entire country with no senior official solely focused on global health security.

If you’re wondering why it feels like we’ve been so ill-prepared for this, we had absolutely no team to prepare for this. A Washington Post article from 2018 reads,

“The abrupt departure of Rear Adm. Timothy Ziemer from the National Security Council means no senior administration official is now focused solely on global health security. Ziemer’s departure, along with the breakup of his team, comes at a time when many experts say the country is already underprepared for the increasing risks of a pandemic or bioterrorism attack.”

As of now,  it almost feels like we are too late. With nationwide shutdowns across Italy, Spain, and Norway, American citizens are wondering what’s next for us. How has it taken so long for the CDC to provide tests? What will we do when medical supplies run out? How long will people have to stay isolated at home? Will we be able to #flattenthecurve?

While it can be anxiety-inducing, and I won’t downplay the weight of what is going on, I do have to point out that there is beauty in seeing just how MUCH people are coming together.

From volunteers donating time to run errands and pick up food/medicine for older and high-risk neighbors (invisiblehandsdeliver), to good-hearted citizens building community lists to volunteer, to simply donating a few bucks to the thousands of chefs, servers, bartenders, comics, artists, freelancers who’ve seen their income wipe out overnight – you can be one of the good eggs.

If you are feeling overwhelmed, remember, a huge part of the anxiety comes from not knowing what will happen next. How you’ll pay your rent, if you’ll get sick, or what the world will look like in three months’ time, but what you can control, is what your role is in the world today.

I think that if you take a little time to give back, it’ll help you, and the world. As for me? I don’t know what the next few days, months, or even years will look like. I just know that the old Hollywood Chinatown I grew up with won’t be the same, for better or worse.

What I do know? We’ll get through this, together.

Meet The Man Feeding Over 4,000 Families a Week in NYC