A Day in the Life With Professional Magician, Ben Nemzer 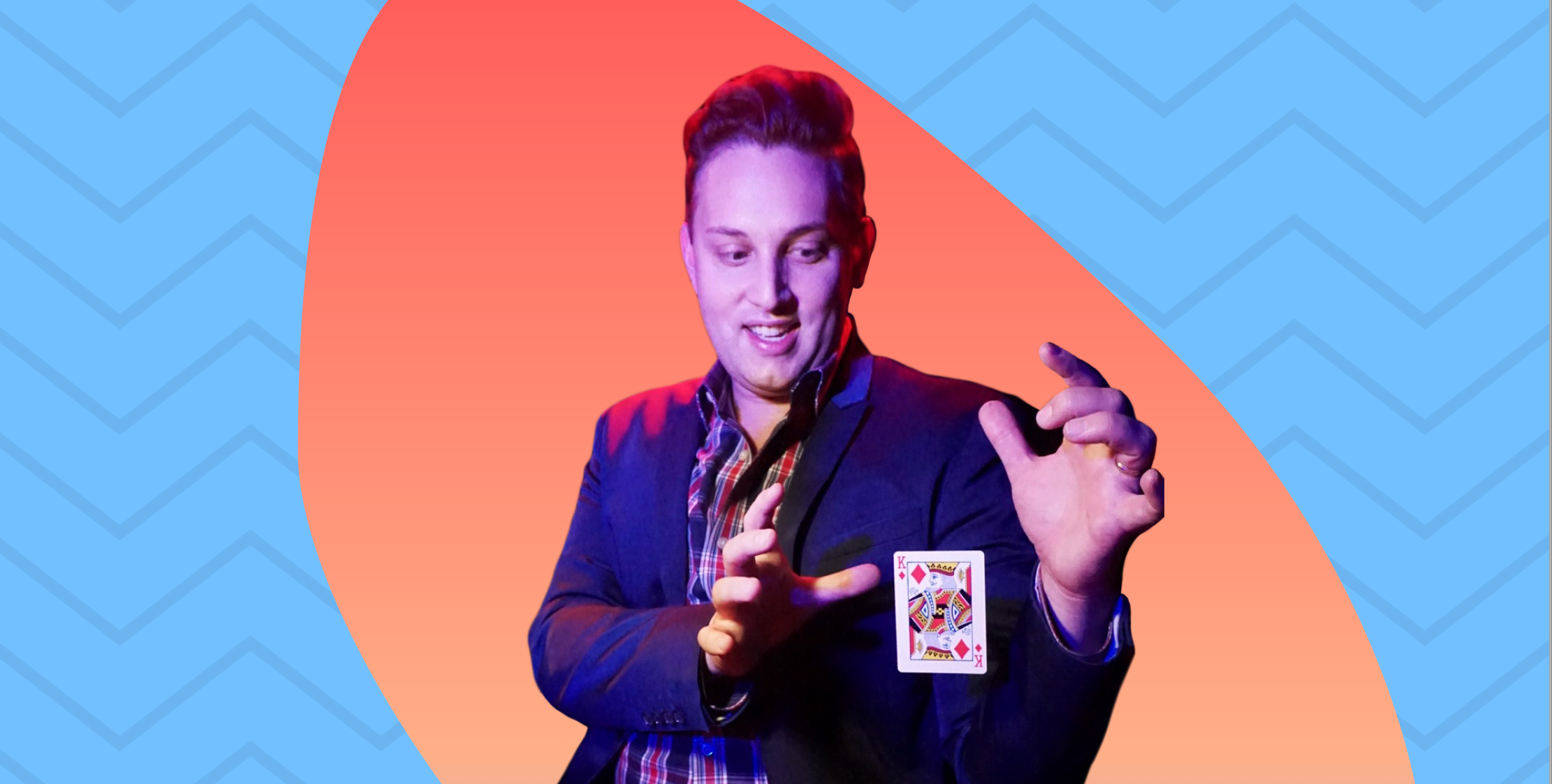 So there’s this a magic trick called “card divination”.

It involves a magician selecting an audience member at random and having them imagine a card, “any card” in their head. Conventionally speaking, the magician shuffles the cards and magically pulls out the exact card out of their deck, to deafening applause. If they’re extra playful, they’ll pull out the card from some nefarious location, like rolled up inside of a lemon or inside the coat pocket of an audience member’s unsuspecting husband’s wallet.

But Ben Nemzer, who currently headlines at Monday Night Magic – the longest running off-Broadway Magic Show in NYC likes to step it up a notch.

The first time I saw Ben perform, he was on stage performing card divination. Just as I thought he was going to pull out the card from thin air, he pulled out a jumbo drawing pad and started scribbling furiously on the pad. When the audience member declared his card, Ben turned the pad around to see a hand-drawn card, that then… rose off the paper like Jesus when he rose from the crypt.

The trick, I promise, was certifiably a Grade A mind fuck.

Ben’s trick is the magic equivalent of Beyonce pulling Destiny’s Child out of the ground during the 2013 Superbowl.  When I ask Ben the secret to the trick, he responds with the typical magician’s mantra, “Oh, I can’t tell you”.

To which I respond sardonically…”What, is there some sort of secret magical society that keeps you guys in check or something?”

“Actually, there are several magic societies..”

And he began to rattle off several societies, including the SAM, Magic Castle, International Brotherhood of Magicians and the Magic Circle.

A quick google search reviews that ALL of these are expansive magical societies with Illuminati-Esq histories and members worldwide in the hundreds of thousands. Many had some of the world’s most influential magicians like Houdini,  Len Vintus, Gene Gordon, and Don Rogers. Ben, it turns out, is a member of not one, but TWO of the organizations and was also a guest lecturer at Princeton University on Magic and Showmanship.

A native New Yorker, Ben started performing magic at the age of 8, when he was given a magic kit from his brother. He started performing in front of his friends and family, and eventually was whisked off to magic camp at Bryn Mahr College where he worked as a counselor for years. He interned at Tannen’s Magic Shop and apprenticed under famed magician, Steve Cohen for years before embarking on his own solo journey.

Since then, Ben and his comedic magic have graced the screens of Comedy Central, live stage performances and sold out Cruise Ships and everything in between. And so, I spent the day with Ben just to see what is a day in the life of a magician.

The topic of magic tends to get a bit divisive in NYC. You either love it, hate it or think that it should be relegated to bar mitzvahs in Long Island. While yes, there are the cheesy magicians that come to mind, New York City is a hub for some of the world’s finest talent.

Ben asks me to meet him at a nondescript office building in the seventh circle of Hell that is Herald Square. Fluorescent lights and a bored doorman watching soccer on his iPhone 5 guards the door, and I make the journey upstairs.

Directly in front of the elevators is a Chinese accounting office with paper signs hawking deals taped all over the doors and windows. But my destination is further down the stock image of a hallway.

It’s the oldest operating magic shop in NYC. Founded in 1925, the shop is a NY institution, serving as a meeting ground for magicians from all over the city and beyond. The shop feels more like a museum than a magic shop, with glass display cases featuring all sorts of magic paraphernalia. Shortening ropes. Glass bubbles. Bite out coins and Chinese linking rings.

Black and white portraits of Houdini and other famous magicians permeate one wall while across the room, an entire wall of magic books. Along with the third, you ask? A life-size mock elephant, of course.

When I ask about the elephant, one of the staff members, whose name I’m told is simply, “Magick” is notoriously tight-lipped.

We arrive just as the place is closing, and the shop is mainly empty, with the exception of a few magicians testing out some last minute tricks. Another magician, Noah Levine preps the space for his own personal magic show, “Magic After Hours”.

Here’s a quick little rundown on magic. It’s spirited history dives as far back to 403–221 BC in China when women were revered as shamans who could traverse the spiritual and real worlds. Their ability to speak to the spiritual world was highly regarded amongst royalty and a must for angsty Kings who needed confirmation that they were indeed, as great as they thought they were.

In Europe, the first book on magic was from 1489, called “Natural and Unnatural Magic” and explained old-time-y tricks like sawing off heads. In the US, magic got out of its infancy in the late 1800s through Vaudeville performances when Jean Eugène Robert-Houdin (the OG magician that inspired Houdini) took his performances and elevated them for rich folks. Of course, I’m skipping the whole part with witchcraft, but this article is about Ben.

When I coerce him into doing a card trick for a “cool picture” in St Marks Place, a trick involving geometric shuffling that is reminiscent of an AP Algebra problem, a small crowd of bystanders forms watching as Ben impresses the shopkeeper of a hat shop. The man, thoroughly unimpressed by our game of 52 card pick up in front of his shop peeks a smile by the end of the night.

You can catch Ben Nemzer and his performances when he is in town in NYC at Monday Night Magic. You can get tickets HERE to his next show on August 12th.